The new exhibition of the National Archaeological Museum, Odysseys, is the main commemorative event on the occasion of the 150th anniversary since the foundation of the Museum.
It attempts to give an account of the adventurous journey of man through time considered from an abstract and symbolic perspective that draws its inspiration from the Homer’s Odyssey.

One hundred and eighty-four works that come either from the permanent exhibition or the rich in archaeological material storerooms of the Museum’s Collections and six loans, three from the Epigraphic Museum and three from the Acropolis Museum, are presented in an enchanting sequence of cultural stratification, enabling the visitor to discern the differentiations and changes and simultaneously detect those elements that reside and remain unaffected in time and constitute the shared imprint which man has left on the centuries, the ages and the civilizations. 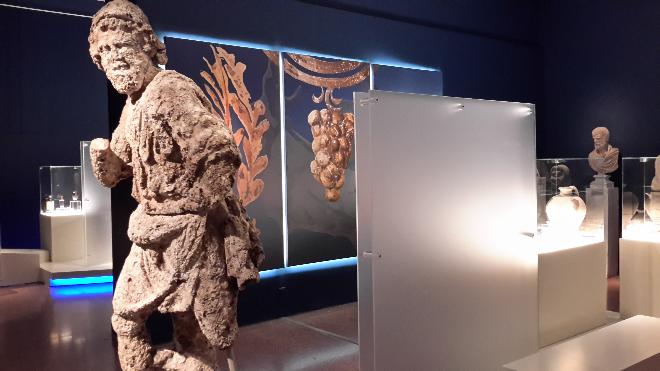 The interpretation of the ancient works through the symbolically charged poetry of C. P. Cavafy, G. Seferis, O. Elytis and Y. Ritsos imparts to the exhibits perhaps the most astute and exciting meaning, setting simultaneously a bridge with today through the modern poetic language.

The audio-visual and digital applications of the exhibition denote in a discreet manner all these notional connections.

Three thematic axes run through the exhibition narrative:
1. The Journey presents tangible evidence of the ceaseless quest of man for raw materials, knowledge and ideas. Τhe variegated cargo of a conceptual ship and the myths that accompanied the sea journeys of ancient people create an allusive environment of adventure and knowledge.
2. Ithacas are inspired by the homecoming (nostos) of Odysseus and devoted to the homelands of all people. Ecumenical ideas and concepts are exemplified by works that embody the collective effort of societies to ensure development and prosperity, as well as the urge of human existence to defy its perishability.
3. In the Exodus, ancient creations symbolically demarcate great achievements of the human mind and spirit inviting each one of us to pick up the torch of creativity.

The music for the exhibition is by courtesy of Vangelis Papathanassiou, the famous composer of the film scores for Chariots of Fire and Blade Runner, from his works Ithaca and VOICES – Dream in an Οpen Place.

The Museum’s permanent exhibitions also participate in the Odysseys and the grant festivity they signify, by means of object stops at emblematic antiquities, designed to involve the visitor in tracing notional connections with the thematic aspects of the temporary exhibition.

Full admission fee:
10 Euro
Reduced admission fee:
5 Euro
– For students from Universities of non EU countries by showing their University Card
– For citizens aged over 65 years old from countries of the EU by showing their ID or Passport
Special ticket package:
Valid for National Archaeological Museum, Byzantine & Christian Museum, Numismatic Museum and Epigraphic Museum (duration 3 days)
Full: 15 Euro
Reduced: 8 Euro
Free entrance:
– Everyone on the first Sunday of the month for the period between 1 November and 31 March
– Visitors under 18 years old (by showing their I.D. or Passport)
– Students from E.U. countries (by showing their University Card)
– Escort of blind people
– Escort of persons with mobility difficulties